Sorry, Event has been expired.

Temporary Exhibition about the Cretan War until December 20th 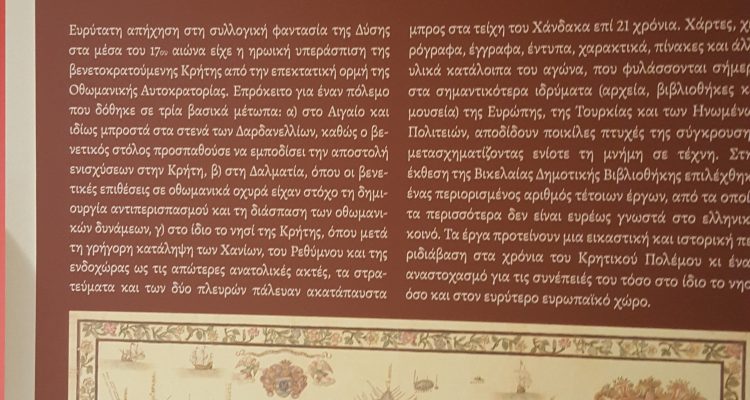 War of Candia (Italian Guerra di Candia, Turkish Girit’in Fethi) or Cretan War (Κρητικός Πόλεμος) is the War between the Republic of Venice (with allies) and the Ottoman Empire. It lasted from 1648 – 1669, with victory of the Ottomans.
Lord Byron used to call this prolonged siege as “Troy’s rival” and it is considered as one of the longest sieges in history. The last defender of Candia was Francesco Morosini, who surrendered the city after long negotiations with the Ottomans.

Crete’s city, Heraklion (Candia), used to be the center of the economic and intellectual activity during the Venetian Occupation in the island. (1211-1669)

The Venetians fortified the city to protect it. In1645 the Turkish fleet first dropped anchor in Chania Bay and soon after, they had conquered most parts of Crete.

In May 1648 the Ottomans arrived in front of the huge city walls of Candia and their first moves were not to attack, but to move their heavy canons to the spot while at the same time they cut off the water supply of the Morosini fountain.

The attacks were repeated for more than 20 years, while the defenders tried to repair the damaged walls and construct additional defensive works. The losses in lives, resources and damages in buildings was very significant and its outcome had a great impact to the status quo of the entire area. — From koules.efah.gr

When the Ottoman troops entered Candia in the 4th of October 1669 the city was empty.

The cost of the loss in the mind of Candia’s citizens, who were forced to abandon it after 21 years of siege, hunger, thirst and furious resistance, can be counted only through the mourning poetry.

Perhaps no other city in men’s history was praised and mourned as much as did Candia in the poetry of Manuel Zane Bounialis:

I wander if those who survived are mourning and feeling homesick for you.

All citizens of Candia should be dressed in black

men, women and boys and every girl they ought to show

that they lost such a homeland.

The year 2019 is the 350th year since the fall of Candia at the Cretan War and Vikelaia Library hosted an International scientific conference themed “Cretan War, 1645 – 1669: Unknown aspects”

From November 1st, until December 20th, Heraklion visitors or citizens have the opportunity to visit an exhibition about the Cretan War by visiting Vikelaia Municipal Library at the city center.

The Entrance is free.