The canons of La Thérèse in Koules Fortress, Heraklion 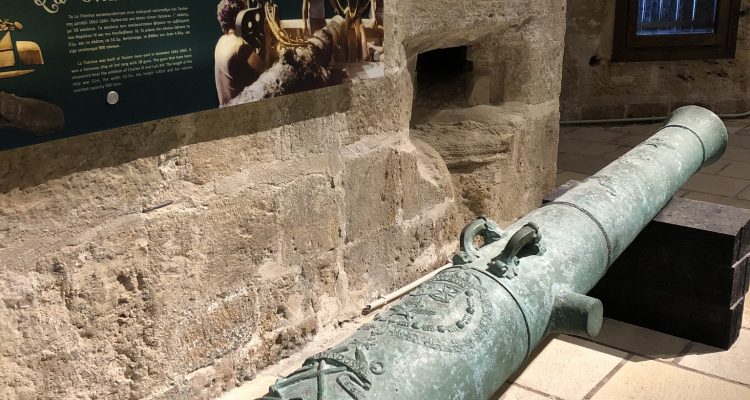 One thing you cannot miss during your visit in Heraklion city is the emblematic fortress called Koules.

It recently suffered a number of destructions due to extremely bad weather (early 2020), and it remained closed for about a week, but it is now open for the public again.

You can’t miss going up and enjoying the unobstructed 360- view to the city and to the ocean, but you also get to admire its ground floor pathways and halls.

Among its various artifacts, you can see the elaborate canons from La Thérèse Ship.

The Thérèse was a 58-gun ship of the line of the French Navy, that was was part of a French relief effort to Candia during a siege by the Ottomans.

During a continuous bombarding, suddenly, the powder magazine of the ship caught fire, which caused the destruction of the ship. From the 350 people on board, only 7 survived.

La Thérèse was sunk on 24 June 1669 and was discovered more than 300 years later by a Greek diver who was unsure about the origins of the shipwreck.

In 1976, Jacques Cousteau visited Crete and after several dives, they managed to identify the shipwreck and to make what is now considered the first systematic underwater excavation in Greece.